’Twas the night before Christmas and all through Ukraine,

Were children whose hearts beat like the speed of a train.

Would this be the year that their school would have what it would need,

To explode their educational experience from the teacher’s dream seed?

In the Chemistry class to see the minerals combine,

Bursting in the air as the molecules create a picture sublime! Could Physical Education class have sports balls to kick and that bounce,

And a climbing rope that would not unravel with each additional ounce?

Would this be the year that the chalkboard screech,

Would be replaced by a smooth chalkboard-wall that everyone could reach?

Or in the physics class where eyes would see, ears would hear, and hands would touch,

The mystery of an electric motor the children’s minds would finally clutch?

Would this be the year, in the village schools,

That the children’s education would be met with the 21st century tools?

It could happen, and it is within reach,

MUCH has received all but $470 to complete this years fundraiser beseech.

The lives of 400 children in four village schools and two orphanages you can touch,

This Christmas season by contributing to MUCH.

Your dollar will go far, the exchange rate is high,

If you have a few dollars just laying around,

Send them to MUCH, and a new purpose for them will be found.

Then know that the spirit of Christmas giving, from deep in your heart,

Has touched the children of Ukraine, and it is your Christmas of which they are a part.

Merry Christmas to all who read this poem of hope this year,

May your understanding of true love through giving be clear!

If you tried to donate online, we apologize that our website was offline. It is working now and waiting for you visit again.

We trust that all have had a blessed Thanksgiving experience. God has blessed Sveta and I with many joys in our life these past six years. We pray that each of you take hold of the many blessings that God has waiting for you.

Sveta and I spent 7 weeks in America with our families and friends. We stayed with new friends in Virginia, and visited two home schools and a church. We were interviewed on a local Radio Station, WPAQ. It was a nice experience. We visited sponsors and spoke at a church while staying with four families of my relatives in North Carolina. We enjoyed meeting with our MUCH Board of Directors. Two weeks in Florida was a special time. My Dad and step-mother, Bob and Jean Koehler, helped us by organizing opportunities to present our story. They organized a meeting at supper with different people every night. It was wonderful to talk with people from all walks of life. We made new friends! It was such a blessed time!

Thank you everyone who helped us with housing and food, transportation, and all our needs!

Our Christmas fundraiser is moving forward! We are improving education in four village schools and two orphanages. Help us spread the joy of Christmas by providing many of the educational tools that will help these children change their future in Ukraine.

We still need to raise $2,720 to meet our goal by Christmas. Shostakovo asks for help to improve their Biology, Physics, and English classes …

In September, MUCH provided a few educational tools! It was a great beginning.

Maksimivka asks for help to improve 5 classes with wall charts …

Migovo asks for help to improve their Chemistry, Biology, and Physics classes …

Ternava asks for help to bring instruments into its Music Program … Veleeky Lubin asks for a tablet for the psychologist …

In September, MUCH began to provide tools for the construction class.

Let’s meet this goal together! 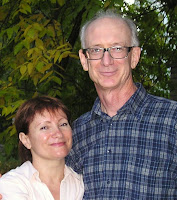 Hello family and friends,
Christmas draws nigh and children dream their dreams! Let’s rally our support to make this Christmas Fundraiser a success to provide a computer teacher and additional massage therapy services at Dobromel Orphanage. We are short of our goal, but with your help, their dreams can come true.

The MUCH team in America, the MUCH team in Ukraine, the MUCH Board of Directors, and Sveta and I wish you a very Merry Christmas, Happy Hanukkah, or Happy Holidays. This season of joy and giving inspires the heart and brings joy to family and community. We send you the spirit of love to share with each other during this season and into the new year.

At one end of the main street, there is a Christmas tree and life-size figures of Father Frost (similar to Santa), and some of the traditional characters of the New Year story. The moral to the story is that good children will receive many gifts, whereas bad children will receive nothing.You may ask, “Why is it different than the spiritual American experience?” In Soviet times, the goal of the Soviet system was to enforce atheism and to crush all spiritual beliefs and practices. Christmas was down-played and the New Year’s celebration replaced everything spiritual about the Christmas Season.

During the past ten years, I have been watching the economy change and commercialism develop and grow. More and more stores now carry Christmas items for decoration, wearing apparel, toys and gadgets. Ukraine is becoming more like America every day. Cash is still the most common currency in the market place, but large company debit cards and local bank credit and debit cards are becoming more common. Ukraine appears to be growing as a consumer society. This is most interesting for a country whose people are about eighty per cent poor.

At this time, Mark and I are in America. Here, I take a closer look with my new wonderful family and wonderful people. We feel an atmosphere of goodwill, love and acceptance from all of them. We thanked these people for their prayers and for their financial support for the ministry, and, it was amazing! They thanked us for our work. I felt uncomfortable when I heard the words of gratitude. It is my duty and calling of God to be an assistant to my husband in working with children with disabilities. I thank you very much for your heart filled with love!

Our last visit to the orphanage of Dobromel identified the need for sponsors for a teacher for a computer class. The government bought computers for the orphanage, but did not provide a teacher position and payment for his labor for this class. Therefore, these children have computers but can not use them. I am sometimes surprised by the education system, but this is one more reason to pray for the government.

I decided to explore the topic of “computer and children with mental disabilities.” I found a lot of information on the internet about the computer’s role in the life of a child with developmental delays. I want to share with you a little bit of information.

“Nowadays, modern technology plays a huge role in the development of children who are unable to learn. Use of computers will help these children to read and write. Also, the use of computer games, tasks, and slide demonstrations will help teachers bring learning material to children more effectively. It will become much easier to manage and care for unstable children by increasing interest and increasing the activity of children in the classroom.
The use of computer technology encourages creativity and contributes to the development of mental processes in children with mental disabilities. Personality development of the whole child improves the quality of his or her learning. Computers can become a means of communication, a means of play, and a means of providing educational activities for children. During the computer activity, the child develops positive emotional reaction. Moreover, the immediate correction of the child’s work contributes to development of his or her mental processes. ”

For me it was amazing how educational software can reveal a child’s capabilities and even help them catch up with their peers.

I recall an example. I was giving therapeutic massage to children while I was living at the Dobromel orphanage/boarding school for a month. The children passed my room every day on the way to their meals. Each evening children came to my room. For them, a favorite toy was my phone, even for the few who have one. They enthusiastically pressed the buttons.The children who did not understand the functions of my phone asked a lot of questions about how it all works. Modern technology fascinates the children: they are hungry for knowledge.
Then Mark came to visit the children with a new “toy”. He brought an iPad. For the next two weeks, the children admired the program which he showed them. I saw surprise in the children’s eyes and a thirst to know new things. Each time that we visited after that, they remembered the many programs and games in this little computer.
Teachers of the boarding school in Dobromel treat children with love and patience.They believe that through education, the deviation in the development of these children is no longer a frustrating circumstance for the child, his or her family, and for society.
Thank you, dear friends for reading our letters and responding to the needs of children with whom we meet and then tell you. Your support will be a great help for the children!

We have demonstrated success of massage in improving speech last October at the Dobromel orphanage. Here, there are five mid-teenage children who are non-verbal. They never received massage or experienced the computer world, which may have facilitated their language skills during their early development. Sveta and I would like very much to work with them using massage and the computer to develop their communication skills.

Can you imagine the potential that computer and massage will offer for the younger children who have communication disabilities? With your help this Christmas Season, MUCH can open a whole new avenue of communication possibilities for them.

If God is guiding your heart to help our children this Christmas Season, send a check to the address below or make an on-line contribution at our website,
www.muchhope.org
Please write Christmas in the memo.