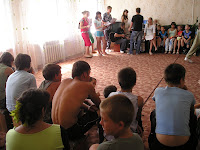 Seven years ago, I moved to Ukraine to work with children in need. The first group of children that I was introduced to was in the city of Marganets, south central Ukraine, at the Orphanage for Children with Mental and Physical Disabilities. At the time, most of the 156 children had learning disabilities, but some had minor physical disabilities.

Leaving my new-found manager to buy clothes, shoes, and winter boots for the children, I moved to missionary school in western Ukraine for five months. When I returned in December, I was introduced to more of the children with their new winter boots. They were all smiles. I saw a glimmer of promise in whom they were and who they could become!

The following 4 year were filled with provision. Clothing and shoes were the main items provided, but we had a number of projects, big and small. MUCH was changing the physical and visual atmosphere, but more importantly, the self images of the children. God’s provision had been meeting the physical needs of the children, but their spiritual needs were still untouched.

Two summers ago, Ukraine Challenge sent a team of short term missionaries to provide a Vacation Bible School at the Baptist church in Marganets. While there, they visited our children at the orphanage, bringing the Good News to them, possibly for the first time. In the process, I was introduced to the youth group of that church. Each time that I would visit Marganets, I would talk with the youth group and encourage them in some way.

During my last visit, I asked if they would like to put on a concert for our children during my July visit. They said yes and it was arranged. They had lost no enthusiasm between my January and July visits. When they arrived to perform the concert, they asked for some boundaries. I told them that the more involved they could be individually with the children, the better. As they began, I took videos and photos, recording the progress of seven years of loving our children. As I realized what God was doing, tears filled my eyes. A new door had opened; a new team had begun a wonderful work!